From a tiny little city ringed by a donut of slum, home to Edgar Allan Poe and John Waters, came this writer of giant talents and petite audience. Those lucky few familiar with Ackerman’s work generally became so through the 80’s zine scene presided over by Factsheet Five. His writing was featured in all the best Marginal publications, while he maintained a disquieting and delightful peripheral presence through those ephemera he refers to as “tacky little pamphlets.”

Though he left us in 2013, his work is is kept alive by a literary elite, among them E. J. Barnes, whose comic-book adaptations of his stories may be had from Drowned Town Press. Tales of the Ling Master # 1 and # 3 is available, and #2 is anticipated. The comic-book version of 2976 Vienna Sausages may also be purchased. E. J. maintains a page dedicated to Blaster which is a fine place to begin an acquaintance with this obscure genius. 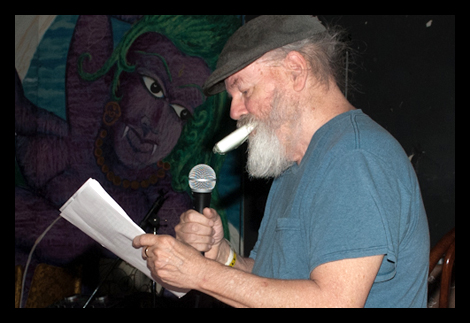